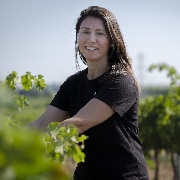 Marta was born in a small fishermen’s village, Vilanova i la Geltrú, in a rainy December of 1976. Since 2001 she is totally involved in Parés Baltà with the entire family, sharing the wine tasks with her sister-in-law Maria Elena. They are a good team and have many things to do in the Parés Baltà winery. Every year she’s discovering new knowledge and applying new ways of winemaking, such as fermentation in amphorae or demij ohns. Marta studied Pharmacy at Barcelona University. During her studies, she met Josep Cusiné, who would become her husband. It is in this period of her life that her passion for wine started. Josep introduced her to wine tastings, and they started traveling to different wine countries around the world. She was so interested in the wine world that she decided to study enology She studied Biodynamic Agriculture’s Master and soon became a cellar manager. They became certified by Demeter in 2013.  She is also a Sommelier. Her last studies have been WSET3 and Biodynamic Master. She is planning to study DipWSET at Weinakademie Österreich in 2022. On the other hand, she teaches biodynamic rules and philosophy in different courses and viticulture schools all over Spain and also in Barcelona University.

We will taste 6 of her wines.

Price: £145  includes dinner and a glass of 6 wines from Marta's estate in Penedes - registration on the website only 14 Seats available. 2 TICKETS LEFT

If you cannot register in the physical event, you can register for the online version and listen:

To join without wines and dinner for the online event: £10 to transfer to our account
Account
The London Women and Wine Club
Natwest
Sort Code: 502101
Account: 31022634
Quote: Marta and your first name

Rachel Blackman-Rogers was born in a small market town in Hampshire, where her mother’s family have lived for generations. She studied geography at Oxford University and then embarked on a varied career in academia, publishing and media including roles as a researcher at INSEAD business school and as a senior strategist for BBC News. She returned to academic studies in 2013 and completed an MA in History of War at King’s College London, before becoming a PhD candidate in the Department of War Studies. Her supervisor is the Laughton Chair of Naval History, Professor Andrew Lambert, and her thesis examines Britain’s strategic and cultural transformation during the French Revolutionary Wars of the 1790s. Contrary to the traditional historical narrative of strategic paralysis and financial chaos, her research has taken an holistic approach to political, economic, naval, and cultural, histories. Consequently, her thesis has revealed that Britain was being insulated from the threat of invasion by an evolution in naval culture and strategy and a fiscal transformation. Simultaneously, the government pushed the institutions of British defence, the Bank of England, and His Majesty’s Navy, closer to parliament to improve national confidence, and used the naval victories to build consensus for the war around a British maritime identity. Her academic interests include strategy, maritime history and identity, strategic and military culture, the role of media in warfare and contemporary maritime issues. She is also currently teaching at the Joint Services Command and Staff College in Shrivenham where she is involved in military education.

Rachel will lead a conversation about strategy and its relationship with culture. She will also touch on the role of media in wartime.

We will have a seated dinner at Cabotte and taste 6 wines.

Find out more
Previous
Next